THIS BLOG IS NOW CLOSED.
Please follow our blog at: queercampusonline.blogspot.com

QueerCampus is a first of its kind LGBT students' group in India. It has just begun as an online forum on Facebook. Since the group is nascent, the concept and idea of organization for it is bound to change over time. But, as of now, to get QueerCampus going, we, the three senior year college students who have come up with this collective, have decided to work on the following things.

What will we implement?
1. An online group to facilitate interaction among LGBT students and discuss the idea of an LGBT students' collective
We aim to make the facebook QueerCampus India group and the QueerCampus blog popular with Indian LGBT students. We invite all queer stuents, LGBT rights activists, community members, and allies(whether straight or gay!) on our facebook forum to have discussions on a myriad of topics-how to form a group across colleges and universities and facilitate resources and members for the same, how to promote visibility for the queer student community, how to reach out to schools etc.
2. To form city/campus specific QueerCampus groups for LGBT students
We will help to earmark campuses and cities that have LGBT students willing to be a part of QueerCampus. Thus there will be several region/campus specific QueerCampus groups. Accordingly, we invite students to serve as QueerCampus City Coordinators who will be responsible for facilitating such a group across campuses in their own city. We will also plan city specific meetings so that our LGBT student members can interact and get to know each other :) We will ensure that QueerCampus India admins personally interact with all QueerCampus City Coordinators who, in turn will be responsible for personally interacting with LGBT student members in their own city. So, such meetings will be completely safe and secure because they will be planned for the queer students, of the queer students and by the queer students!
The first such group is - QueerCampus-Delhi
3. Encourage Queer students to share their stories, experiences and opinions
We will use the QueerCampus blog to post opinions, relevant news/information, updates about QueerCampus and evolve it as a means to reach out to allies and prospective members. We would like the blog to be the collective voice of LGBT students..so if there are any budding student writers or poets in our group, they can feel free to mail us anything that they would like to be published. We will post it on the blog with their name/pseudonym..as they wish :) And if they have a blog and would like it to be listed at QueerCampus, they can mail us the link!
4. Carrying this forward
We, QueerCampus India admins, are twenty somethings on the brink of leaving college. And we( and I guess, you too) understand that this will be a long drawn battle. It is possible that QueerCampus group may remain dormant at times. So, at the very least, we will continuously work towards building a strong online base/support for this LGBT students' collective. And we hope that everyone of you will be an ally in our endeavors.
How can YOU support us?
If you are a Queer Student
We sincerely invite you to be a part of QueerCampus. We need tonnes of student members for our collective to be a success. It is a place where you can meet other students like you, not only in your own city but also across India. Join our facebook group QueerCampus India. Participate in discussions. Have your opinions published at QueerCampus blog. Publicize QueerCampus among other prospective members. You can also act as our QueerCampus City Coordinator. Drop us an email.
If you are an NGO
Contact us on our email. Get to know about our collective. Please inform us of any way in which you can help us to grow, organize, and support the activities that we can plan for the LGBT student/youth members.
If you are an LGBT rights activist/community member/media organization
Help us to build an online support base for QueerCampus. Join our group. Feel free to mail us, participate in discussions and give ideas. To forge this collective into something significant, we will need your support for a long period of time.
If you are a non-queer identified person
Understand. Accept. Respect. And support. We would love to hear from you and know of the ways in which you can help. Drop us a mail :)
After pride parades, Azaad Baazar, Queer groups and parties...this Pink Revolution is only inevitable. I welcome all queer students to be a part of it.
Posted by QueerCampus India at 11:00 PM No comments: 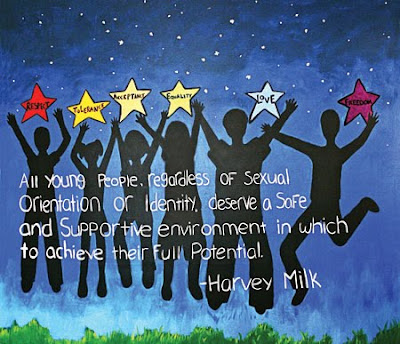 Why do we need QueerCampus groups? With Pride Parades, India's own LGBT pride store, partying groups, magazines and a plethora of support groups...India's rainbow is already shining. After all it's only a matter of 4 years or so..once you get out of your student life, there are many, many options to explore. So, where's the gap?
Such a gap is best "felt". When I was coming out, making gay profiles, searching for gay communities et al..I really couldn't find what I was looking for. What I wanted 3 years back was QueerCampus. And all I could find was, well..to quote my thoughts 3 years back "partying and dating groups full of grown up people". How could have I worried about gay pride, Azaad bazaar tee-shirts, Boyzone parties, and Queer Delhi activities when I didn't even understand my sexuality. And the NGO's, support groups and helplines seemed dark and uninviting! I had never heard/known about any LGBT movies or magazines and the equality forums looked like some glitzy talk.
So, now we know. There is a gap and QueerCampus aims to fill this gap. While, in recent years young gay people have been coming out, interacting, looking for and forming their own informal group of gay friends, QueerCampus aims to facilitate such interactions and seeks to provide them popularity and recognition by grouping them under a collective. Only by organizing it into such a structure will we be able to rally for official students' LGBT groups, provide counselling and seek support, understanding and acceptance from parents, friends, families and society.
Posted by QueerCampus India at 9:55 AM No comments:

QueerCampus is all set to have a group for LGBT students from Delhi across various universities( DU, GGS Indraprastha University, JNU, IIT Delhi) and colleges.
Please send us an email at myshiningrainbow@gmail.com to be a part of it. Do mention the name of your university/college.
Join the facebook QueerCampus group for more details.
Cheers! :)
Posted by QueerCampus India at 8:29 PM 1 comment:

I wasn't always comfortable with my sexual orientation. Rather, I have faced depression because of it. I didn't always have this 'my sexuality is just another part of me' attitude. Rather, I was obsessed with how to deny it. There was a time when I would search orkut for gay communities and it would just throw up some sleazy communities. The whole world might have been celebrating gay pride, with India giving a nascent, iridescent rainbow glow. How could I have known?
My original plan was to forget about my homosexuality and finally, to come out at 30! Bad idea it was, eh?! I'm 20, already out to a few close friends, planning to be generally out among friends and acquaintances in about 1 year and planning to be out to family as soon as possible! And despite the risks and problems, I couldn't have been happier!
Owing to the overthinker that I am, in retrospect I have gone over my life, over and over again...to find out what changed it to such a great extent. Why was my 2nd year in college different from the 18 years that came before it?
And, the answer is one resounding sh(out)...coming out!!!
Though, I agree that one should not come out in a rash, unthinking manner; rather it should be a careful, calculated decision. Coming out is very circumstantial and it may take days, months and years before you can actually reveal your orientation to friends and family. But what matters is the 'will to come out'. It triggered an irreversible process in me that basically made me land up at Delhi Pride Parade 2009 :D
So, once a person makes that decision, it is important that we, as a community, should have support to offer. And in recent times, both virtual arena and real life have been overflowing with support groups and interactive spaces.
Somehow, I see a gap. Once you are done with your student life, there are many, many things to explore. But, the most important beginnings of a confident and out gay person are made when we are still teenagers, school and college going students. I am aware that many existing LGBT spaces like Nigah, branch off into colleges and student spaces as well. However, my idea here is a little different.
I want to sh(out) where no one speaks a word. I would like to see a students' LGBT group being evolved from the grassroots. No, doubt...it is difficult to get things organised in this respect. Even the concept and idea of organisation for a such a group is bound to change over time. So, my first task is to stand under the gay sun, open my rainbow umbrella and present an idea. Of course, it'll be an informal, fun group to start with..but lets start with it!
Ananya (member, QueerCampus India)
Posted by QueerCampus India at 11:10 AM 3 comments: